When it comes to social justice, Australia has much to be proud of – particularly in the last few years. We reflect on some of these victories that are helping all Australians to unite in harmony. 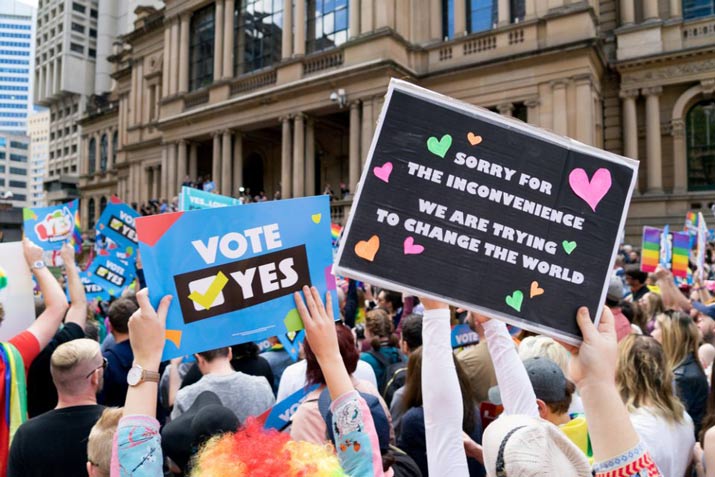 Australia has seen dramatic improvements in human rights in the past few years, with several key moments and legislated changes allowing us to take a step forward.

With the World Day of Social Justice held yesterday, we reflect on some of these victories that are helping all Australians to unite in harmony.

Reconciliation and furthering the rights of Indigenous Australians

One of the key areas of social justice in our country is the journey towards true reconciliation with Indigenous Australians.

Aboriginal, Torres Strait Islander and non-Indigenous Australians have been working hard to make this a reality, with many victories along the way.

Since the Council for Aboriginal Reconciliation (CAR) was established 25 years ago, there have been numerous conversations and debates on the best ways to improve relationships between all Australians, no matter their background, to achieve true harmony.

All across Australia, workplaces and educational institutions are implementing Reconciliation Action Plans to support this movement. These are based on four pillars: Reflect (preparing for reconciliation), Innovate (implementing a plan), Stretch (embedding it into your business or school’s framework) and Elevate (establishing leaders in the reconciliation movement).

There have been several key moments in this movement, including the establishment of Reconciliation week, and former Prime Minister Kevin Rudd’s historical apology to the Stolen Generation.

Changes to the Marriage Amendment (Definition and Religious Freedoms) Bill 2017, to allow same sex marriage, was a watershed moment for the LGBTQI community in Australia.

It was a landmark decision on the road to social justice, and one of many victories the LGBTQI community has won in recent years.

When it comes to study, a significant guide was released in 2015 to assist in the transition to tertiary education. The Australian Human Rights Commission launched the LGBTI University Guide to assist LGBTI students find support and inclusion in their studies.

The LGBTI University Guide was developed as a collaboration between the NSW Gay and Lesbian Rights Lobby, Star Observer, Transgender Victoria, Out for Australia and Organisation Intersex International Australia.

The march for equal pay, rights and standings in the workplace for women is a social justice issue that’s still raging. But there have been notable improvements. In 2006, Roy Morgan research showed that 39 per cent of women surveyed were the main income earner in their household. In 2016, that number had risen to 52 per cent.

In that same period, pay-checks for Australian women in full time positions rose from $51,000 to $73,500, on average. To top it all off, Julia Gillard also became Australia’s first female Prime Minister.

Australia is at the forefront of gender equality, with The Minister for Women Kelly O’Dwyer to represent our country at the 62nd session of the United Nations Commission on the Status of Women this year. The issues of improving female workforce participation, more female leadership, cyber safety and developing women’s enterprise are the main issues she will take to the commission.

While the Federal Government will speak on the global level, it is also helping grassroots movements share their voices on social justice. The Commonwealth has funded the Association of Women Educators’ Leading Social Change project. This aims to share the stories, advice, recommendations and resources of female educators and students across the country to bring these issues to light and begin the path to social justice.