Not-for-profit charity Rona Scrubs was created after a conversation between the founder Annabelle Parsons, a Product Manager at Open Universities Australia (OUA), and a close friend who worked in health. When the COVID-19 pandemic hit Australia, life as we knew it was disrupted in countless ways for all of us. Health workers on the front line of containing the virus suddenly found it difficult to access the essential gear they needed for their daily work, with scrubs suppliers experiencing a backlog in demand.

To help Australia’s healthcare workers keep themselves and their families safe, Rona Scrubs was founded - connecting sewing angels with the medical heroes at the coronavirus coalface.

How a chat sparked a charity

Not-for-profit charity Rona Scrubs was created after a conversation between the founder Annabelle Parsons, a Product Manager at Open Universities Australia (OUA), and a close friend who worked in health. When her friend described the difficulty in finding scrubs, Annabelle – a keen sewer – offered to make her some.

This was in late March, when the coronavirus curve in Australia was soaring and hundreds of new cases were being reported daily. With so many health workers desperate for help, Annabelle says the idea “spread like wildfire”, and a couple of days later they had the Rona Scrubs website up and running.

Realising she would need help with sewing the scrubs and sourcing enough fabric to fill the huge demand, Rona Scrubs launched a pilot in Victoria.

“It went on the news and it went massive,” says Annabelle.

Annabelle says she was surprised to find out that it has not just been health workers who have benefited from the project, with sewing ‘angels’ getting in touch to tell her how much they have cherished being able to help out during this time.

“What’s been beautiful about it is while we’ve been helping healthcare workers we’ve been able to give back to the community of sewers. I’ve had 80-year-old women saying that this has given them a lot more purpose in isolation. I think it has helped people to feel a level of connectivity when a lot of people have been having a difficult time.” 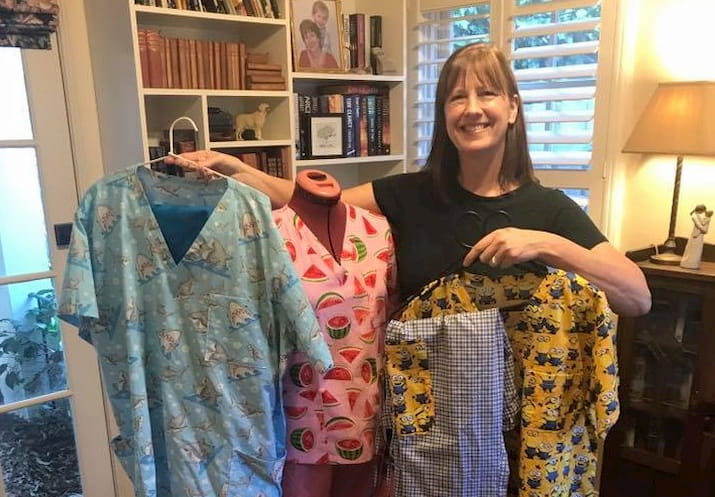 Annabelle, who has been working tirelessly on the project on top of her full-time job, says OUA has been behind her all the way.

“They’ve donated and matched donations, and a lot of people at OUA have helped distributing scrubs and looking after angels in our local area. It’s been a really beautiful experience in seeing how collaborative the company is.”

She says having the support of her workplace and teammates during this stressful time has been fantastic, with her manager and fellow staff even cutting up fabric and delivering the finished scrubs to healthcare heroes.

“It’s been an epic journey to be honest and OUA has been incredibly supportive, which has been great.”

With lockdown restrictions easing in Australia, the suppliers of scrubs have been able to restart work, meaning Rona Scrubs is aiming to wind down the charity as the gap in demand is filled. They are no longer taking orders and are working on completing the requests made, with 2,500 orders already completed.

Annabelle says that while they are nearing the finishing line, they still need fabric and volunteers to distribute in some areas.

“We were trying to close a gap while the manufacturers were unable to fulfil demand,” Annabelle says.

“We wanted to give health workers a bit more confidence with looking after their own family and themselves. There’s been a lot of people who have been helped which has been great.”

OUA is proud of the work of employee Annabelle as she supports workers on the front line.  Find out more  about the Rona Scrubs initiative.